Charles Bonnet syndrome is a condition when patients with normal psychics but visual loss have visual hallucinations [2]. It is described for the first time by the Swiss writer and naturist Charles Bonnet in 1760 [8].

Visual hallucinations are defined as perception of an object or impact without real external stimulus and is seen in people with different mental, neurologic and/or ophthalmologic damage [13] They differ from the visual illusions – the last are caused by external stimuli and the image may be altered in size (micropsia or macropsia), shape (dysmorphopsia or metamorphopsia), position (telopsia), number (polyopia), color etc. Palinopsias or visual perseverations are classified aside, described as persistence or recurrence of a visual image after the excitatory stimulus is withdrawn and very often they occur in different mental illnesses [9].

The hallucinations vary from simple (photopsias, scotoms, simple colored objects), to more complex (different pictures, faces) [6]. The causes of their occurrence are numerous – from different psychoses, deliria, dementias to conditions with unknown etiology as the Charles-Bonnet Syndrome [2, 5, 13]. Recent examinations via functional Magnetic Resonance Imaging (fMRI) of the brain try to explain their pathogenesis but it still remains insufficient [4].

Recently the neuro-ophthalmo-sonology has been applied as a fast and highly informative method for imaging normal and pathological eye structures aiding to distinguish the ophthalmo­logical from the neuro-ophthalmological symptoms and syndromes [1, 14].

The aim of the study is to demonstrate the diagnostic abilities of multimodal 2D/3D/4D ultrasound imaging of chronic blast eye trauma associated with full blindness and visual hallucinations.

A 31-year-old man with amaurosis after eye blast trauma at the age of 17 (14 years ago) when a jar full with gun powder exploded in his right hand was examined. He had combine traumatic injury with partial burns of his legs, arms, face and ocular bulbs. Plenty of glass particles were sown in these regions. On the same day he underwent emergency surgery for extraction most of the particles from the eyes. Persistent right amblyopia and left amaurosis were established two days later. After three months a new surgery of the right eye was performed due to blood collection and residual glass particles. The same eye was filled with silicon as a treatment of retina detachment. After the last procedure the patient had temporal recovery of some visual abilities – barely seeing different subjects, silhouettes and even colors. Four months later in Belgium the patient underwent new surgery – the remaining particles were removed from his right bulb followed by new silicon filling. The same procedure was repeated in 2000 due to progressive visual loss and retina detachment. In 2008 and 2009 experimental implantation of “Alloplant” was made in Russia with controversial subjective effect. Since then the patient has color hallucinations known as Charles Bonnet Syndrome.

Parallel clinical and neuro-ophthalmological examinations for evaluation of his neurological and visual impairments were performed. The multi­modal neuro-ophthalmo-sonography 2D/3D/4D was usеd for visualizing the structures: the vitreous bodies, the ophthalmic nerves and the ophthalmic papillae. The blood vessels of the eyes including the ophthalmic arteries and veins were evaluated by B-flow imaging. The results were compared with those obtained from brain Magnetic Resonance Imaging (MRI).

In order to evaluate the functional activity of the brain cortex classical electroencephalography was performed with quantitive Fast Fourier Transformation (FFT). The alpha power temporooccipitally was evaluated and analyzed after flash photostimulation at 9 Hz for both eyes and for each eye separately (while the other eye was covered with a patch). Thirty-second intervals of the conventional EEG record were analyzed. Pattern reversal evoked patentials were performed using standart parameters of the medical equipment.

Fig. 1. Photo picture of the eyes. Right corneal leucoma and phthysis on the left side.

The multimodal neuro-ophthalmo-sonographic evaluation showed normal pattern of the main head, ophthalmic and basal cerebral arteries and veins. The left corpus vitreous was with great deformities, chronic retinal detachment and atrophy of the ophthalmic nerve. The right bulb was with smooth, round shape, anechoic. Because of the shadow effect of the silicon filling the lens, ophthalmic disc and optic nerve could not be visualized (fig. 2). 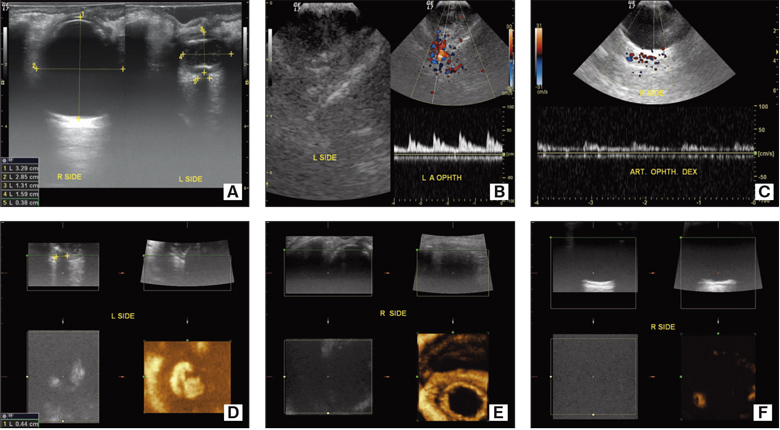 Fig. 2. Multimodal 2D/3D/4D ultrasound of the orbits. B mode of both eye bulbs (А). Normal ultrasound pattern of the ophthalmic arteries and veins (B, C). A severe left eye deformation with chronic retinal detachment and optic nerve atrophy (D). The right bulb was fully anechoic with irregular contour. No ultrasound images of the lens, optic disc and optic nerve were obtained due to silicon filling of the vitreous (E, F).

Fig. 3. Brain MRI. Normal brain parenchyma, ocular muscles and occipital cortex (A). Bilateral atrophy of the optic nerves with severe deformation of the left eye (B) and silicon filling of the right orbit (C).

FFT analysis of the EEG revealed frequency peak in 8.8 Hz. FFT before the photostimulation showed nonsignificant asymmetry in the alpha power, which is higher in the right brain hemisphere.
During the bilateral intermittent photostimulation (9 Hz) significant reduction of the alpha power temporooccipitally was registered. The changes were more prominent on the left cortex while stimulating the right eye. The examination was associated with simple visual hallucinations (colored circles) at the end of the photostimulation and lasting a couple of minutes after ceasing the stimuli (fig. 4). 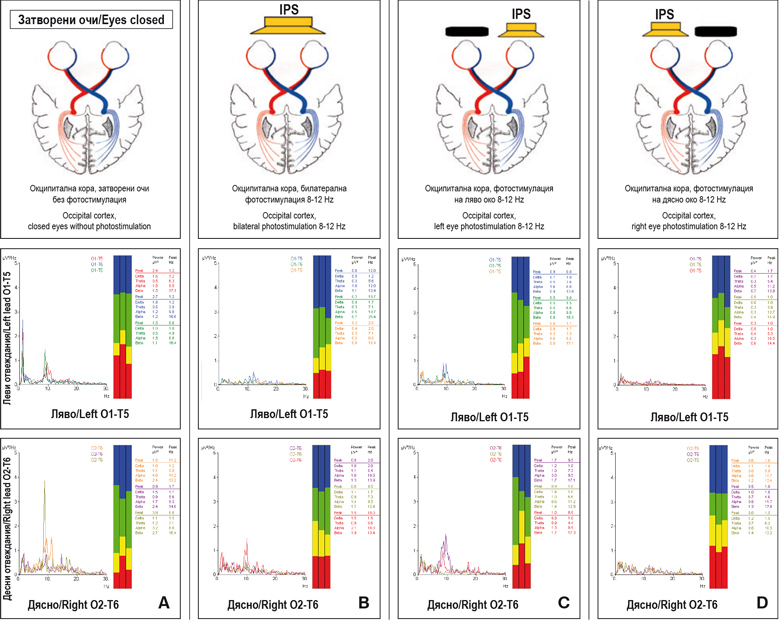 Fig. 4. Fast Fourier Transformation (FFT) of EEG. Background activity – peak of the power in 8.8 Hz (alpha). FFT analysis before stimulation showed left/right alpha power asymmetry (А). The bilateral intermittent photic stimulation showed a sigificant reduction of alpha frequency power in the temporoccipital region bilaterally. The reduction was more prominent on the left (B). The consecutive monocular intermittent photic stimulation revealed pronounced reduction of alpha power bilaterally more prominent in the left temporooccipital area during stimulation of the right eye (the patient had visual hallucination – colored rings during the photostimulation and after it) (C, D).

No responce was registered during examination of the visual evoked potentials.

The present study shows that the multimodal ultrasound imaging is a reliable non-invasive method for screening and diagnosis of morphological eye changes associated with chronic blast trauma [7]. The application of multimodal 2D/3D/4D sonography with B-flow imaging of the ophthalmic blood vessels increases the diagnostic value of the routine B-scan and gives additional information about the topic, severity and characteristics of the pathological process and its vascularization [1, 14]. The study shows complete match between the ultrasound and the MRI imaging of the ocular structures in our patient.

The parallel application of EEG and visual evoked potentials gives additional information about the functional capacity of the retina, visual pathways and the occipital cortex after the trauma. Dispite of the practical blindness established from the neuro-ophthalmological examination, during the repetitive photostimulation a change in the baseline alpha activity was registered on the occipital cortex, which is significant only in the left temporooccipital area during stimulation of the right eye. This electrophisiological sign for photic influence on the visual cortex allows us to assume the existence of some functional capacity reserve of the right eye and visual pathways, which matters for the prognosis of the illness.

The pathogenesis of the simple visual hallucinations in form of colored rings at the end of the examination and their persistence after the cease of the stimuli remains unclear. The patient has experienced such conditions many times after losing his vision that are difficult to be explained and their pathogenic pattern barely to be understood with the methods we have used in this study. The occipital cortex response to photic stimuli most likely supposed to be generated from the damaged ipsilateral retina.

It is known that the hallucinations in the Charles Bonnet syndrome can greatly vary – from simple, repeating colored spots to complex colorful images of people and objects. The patients understand that these images are not real and can describe them very detailed in shape and localization. Most authors consider them as being a result of deafferentation caused by absent visual impulses ascending toward the brain cortex. This hypothesis is supported by experimental research showing the appearance of such hallucinations in healthy sighted individuals deprived from light [10]. The functional MRI examinations within people with Charles Bonnet syndrome demonstrate presence of reorganized neuron network with high activity in the ventral visual cortex during and in the absence of hallucinations [5, 11]. According to Santhouse et all. [12] using fMRI it's possible to make mapping of the hallucinations – they assume that the complex hallucinations correspond to damage of the front-temporal cortex, the activation of gyrus fusiformis is associated with images of different faces, the ventral occipital cortex – hallucinations of objects and scenes and the parietal lob – paliopsias and perseverational images. The simple hallucinations (in a form of lines, dots, circles of light etc.) are associated with bilateral damage of the visual pathways from the retina to the primary visual cortex and very seldom appear after damaged associational visual fields [3, 5].

In conclusion, the study demonstrates the high diagnostic value of the parallel neuro-ophthalmo-sonographic and electophysiological examination in chronic eye injuries after blast eye trauma. In order to clarify the pathogenesis of the simple colored hallucinations, associated with practical blindness, known as Charles Bonnet syndrome, further and more precise examinations using fMRI are needed.